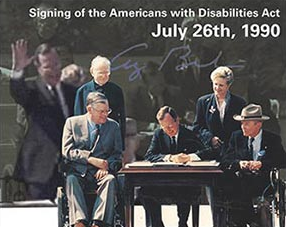 It has been 22 years since the Americans with Disabilities Act, ADA, has been put in place. On July 26, 1990, President George H. W. Bush when he signed the Americans with Disabilities Act (ADA) into law. Although there is still a long way to go, this was great progress toward helping each individual receive there full rights. This civil-rights law was put in place to help discrimination.

Here is a video that documents the speech given on July 26, 1990 by the President. In the video, President Bush speaks to a huge audience of activists, Congressional supporters, people with disabilities, and their families and friends gathered on the south lawn of the White House.

The 22-minute film, provided to the Department by the George Bush Presidential Library, is being re-released on the Internet to increase awareness of the ADA.